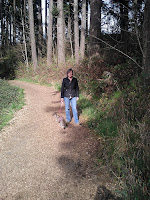 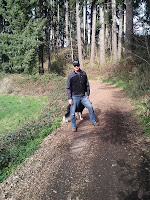 I just realized that we are starting to dress alike.  This is what happens when you spend a lot of time together. As of March 30, we will celebrate our 17th wedding anniversary.  Ted was diagnosed two months after our ten year anniversary.   I am happy to say that we need a new picture of the two of us because we are both aging.
If our current line of blog posts seem to be similar pictures, hiking in the woods,  it's because we aren't doing anything wildly exciting right now.   I am in film school, mostly as a hobby and because I'm in the constant pursuit of trying to improve my writing skills.  I can only afford to attend one class at NW Film School, so I'm making the most of it and will be producing a yawn inducing montage about wine making, not to be seen in public, ever.
Exercise:  As we mentioned before, exercise has been a key ingredient to keeping us semi-fit and somewhat sane.  Our local fitness center closed in December, and we have been on the hunt for a new place within our budget.  Turns out the only place we can afford smells a lot like pee.  I do love Yoga, but deep breathing pee is a buzz kill, so I have taken advantage of my lofty community college professor status and have signed up for a PE class that will only cost me $5 tuition plus a $15 fee, so $20 for 10 weeks.  Not bad.  We have also signed up for meetup.org and one day we have full intentions of attending one of the urban hikes.  I discovered this group three weeks ago, exactly ten minutes before I caught a nasty cold.  As soon as we participate, I will take yet another picture us hiking. 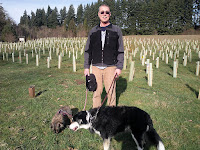 In more exciting exercise news, Ted will be taking a Tai Chi trainer's class in May.  He is really good at Tai Chi, probably has something to do with a background in dance and physical therapy.  We can barely afford the training session, and he is not doing it to make a living because he would lose his disability, which is what pays our mortgage,  but a giant light bulb went off when the opportunity came up.  When our local fitness center closed, his Tai Chi class prices skyrocketed to $80 a month and that would only allow him to go twice a week, and it does not include any other form of fitness, forcing us to the community center, which is much cheaper, but as I stated before it's a bit too earthy smelling for us. If all goes well, he will take the training class and get certified in a special form of Tai Chi that he can teach without being a "Master."  We are going to talk to our oncologist to see if perhaps Ted could teach cancer patients and their caregivers for free at the local hospital.  It's a win-win. He will do his Tai Chi workout several times a week at no cost to us and he will be helping cancer patients and their families.
Travel: No money. No travel.  Broke, broke broke.  I will be taking an exotic trip to the Middle East this summer to tie up some emotional loose ends from my past.  I'm scraping the bottom of my checking account to pay for this and will be staying in $12 a night "pensyions."  I am writing about this trip for a book, so hopefully it will pay for itself one day, but Ted will not be joining me, which breaks my heart. First of all, we couldn't possibly afford a ticket for both of us, so I will dearly miss travelling with my best friend.  We love doing the same things and never argue.  We are eerily alike, but my dear Ted is not up to such a trip, and despite how well as he is doing, he cannot handle sitting on a plane and traveling for two days. He is 6 foot three and has an artificial immune system, which  cannot handle the possibility of food poisoning, something that left me with my head hanging over a toilet more times than I can count when I was a healthy 20 and 30 something.  More later!
Posted by Unknown at 5:59 PM