4.Our Recipe for Surviving Crap

Winston Churchill once said, "When going through hell, keep going." That's exactly what we did.  Immediately following Ted's diagnosis and the loss of my stepson Patrick, I was overcome by grief.  Getting out of bed in the morning was a challenge, especially since sleep was elusive.

I would wake up, stare at my feet and have to command them to move.  I did this with my outside voice, actually saying, "right, left, right, left, right, left." I'm sure Ted wasn't thrilled with my morning conversations with my feet.  It was the first time in his life he'd been able to sleep beyond the crack of dawn, but sometimes that's all I could do to force myself to go to work. 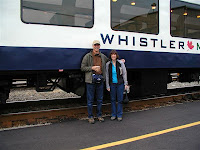 The thought of leaving his side for even a minute, saddened me.  I kept hearing the ticking time bomb and didn't want to be cheated out of a second with him, but eventually reality slaps you in the face and you have to learn to cope, and as weird as this is to say out loud, we are happier now than we've ever been.You have a choice to give up and expect the worse, or keep moving forward.  We kept going.  I of course expected the worst, and Ted ignored all the doom and gloom prognostications,  and he eventually taught me to do the same.  I now only worry when I have to.

We did three key things that I think helped us emotionally and physically. We made exercise the center of our days, we began exploring the beautiful world outside our doors, and we got involved in volunteer programs.

When I say we made exercise the center of our days, I don't mean we became professional athletes.  I'm like a puppy on caffeine. I've always been a high energy person, so I needed to find things to do   to drain every ounce of nervous and physical energy out of my body, naively hoping I would collapse on my pillow at night and fall into a non-thinking state of slumber for at least eight hours.  Six years later, and this is still a work in progress, but I'm doing much better.

The first thing we did was bump up our walking routine.  About a year before Ted's diagnosis we had begun a regular walking routine, but after the diagnosis, I felt compelled to walk ever day, rain or shine, which means we own a lot of rain gear considering our location.

Each day we pushed a little farther.  Immediately following Ted's surgery, he was only able to walk the hospital hallways, and this required assistance, but by the end of week one, after his return home, he could go around the block.  Within a month he was able to walk 45 minutes.  He'd have to sit sometimes but that eventually went away too.

Our goal each day is to walk five miles.  During the school year when I'm teaching, we sometimes only get three miles in, but during the summer break we try to walk six to eight miles a day. Our dogs are the best athletic coaches you can get.  They demand we take them on at least one long walk a day or they threaten to chew our legs off.

We have made walking and hiking the focus of our days and of our vacations.  When I started the bucket list, I made sure to chose places with great walks.  One of our most memorable walks was during a visit to New York City.  We put 12 miles on that day because we walked the perimeter of Central Park. The park is about seven miles around.  At least that's what our pedometers told us.

In 2008, we took a fantastic hiking vacation to the Cotswold's in England.  We made reservations through a company I found online.  They chose the hotels and bed and breakfasts.  Each day they collected our luggage from our lodging stop, and we'd hike to the next night's accommodation with a small day pack, and if we timed it right, we'd find a local pub about halfway between each day's journey and stop for a quick bite and a pint of beer or a glass of wine.  Just enough fortification to get us to our next destination.

Each day's journey was anywhere from 8-12 miles, with the exception of the first day.  That was a toe pincher.  They gave us a local map with directions that included lots of left turns at churches and cow pastures. I think the cartographer drank a lot of ale.  What was supposed to be a nine mile day became an 18 mile trek that included electric fences, streams, and over zealous cows.  I'm used to fearing lions and bears in my part of the world.  Who knew sweet little cows could accidentally kill you.
At one point, somewhere lost on a hill above a cow pasture that extend to the end of the earth, Ted sat down and told me to go on without him.  I did and accidentally found the trail again.  I wasn't sure it was our trail, but it hinted to the fact that civilization was probably somewhere at the other end of it, so he got on his feet and kept walking. This is a good thing because he's six foot three, and I'm five foot six.  You get the picture.  By the time we got to the hotel, each of our toes felt like there were little clamps crushing them.  We consumed the best tasting beer we have ever had that night.


LOCAL TRAILS
We happen to live in a hiker's paradise, but even if you don't, you shouldn't let that stop you.  We've traveled to many corners of the world and no matter where we go, we find great little trails to take, both urban and country trails.   Our city has a labyrinth to choose from.  We know which ones to avoid (that would be the ones where dubious characters smoke crack pipes and have imaginary conversations with park benches), and we know the safe ones.  We are fortunate to live in a part of the world where green space is valued.  We hike urban trails in Portland and Vancouver, and we often hike the Columbia River Gorge.


Zumba, Pilates and Tai Chi Oh My
I can't mention exercise without discussing our weekly routine.  Each week we both try to make it to Zumba and Pilates classes.  Ted also does Tai Chi, sometimes four times a week.  I have included something called Belly Fit into my routine.  Our routine is to walk every day and work out at least every other day.   It keeps us active mentally, physically and socially.

No matter where you live in this world there is someone desperate to entertain you, and when you are on a cancer budget in the the United States, life can seem pretty desperate.  Much of your time and energy is spent in doctors' offices spending money you can no longer make.

So when is there time for fun, and how can you afford it?  Keeping entertained was a necessity.  We needed distractions, so we started out by purchasing a weekly entertainment section of our local paper and began circling weekend events. We turned it into a game.  We HAD to circle at least one thing to do each weekend or there would be dire consequences. We never declared what the consequences would be.  After all, our life was a dire consequence and anything worse than what we were going through would be too scary to say out loud. The only other rule was to elminiate anything we couldn't afford, which often times left us attending events that required donations of canned food as the admission price, and I must say, those were some of the most memorable things we did.

Broadway productions require money, but a local miniature train convention only requires a can of corn. The audience at those events is almost as entertaining as the doll sized trains.  Imagine a room full of middle aged men and a few nine year old boys watching a Lionel train orbit a replica of a Normal Rockwell painting about ten times in an hour, and you certainly feel like you've gotten your money's worth.

Free wine tasting anyone?
Turns out we live in wine country.  Ted and I weren't wine drinkers when this all began but after a trip to NYC, we soon learned to enjoy what our corner of the world had to offer.  While dining at multiple restaurants in Manhattan, we noticed a large number of wines from Oregon.  If it's good enough for the sophisticates of New York, then by gum it must be good enough for us, so with little effort, we typed wineries into Google maps and discovered a gazillion of them. (Keep in mind, we hadn't lived in the Pacific Northwest very long when Ted got diagnosed.)  There are multiple locations in our area that offer free or low cost wine tastings, so we do. Not only have we made really good friends that way, we've also learned a lot about wine.

Entertainment Challenge
Even if you aren't lucky enough to live in wine country, challenge yourself to do something you don't normally do. Even if you or a loved one doesn't have cancer, try the entertainment challenge. Set a budget (even if you are stinking rich) and force yourself to attend one event every weekend. Sometimes the lower the budget, the more entertaining. What started out doing one event per weekend, which turned into a very rich social life, so much so, it's overwhelming at times, but in a good way.

We did things I never thought I would do, and we seem to go through stages. For about a year, we joined a bowling league. If you knew me personally, you might have a hard time believing that one. I still don't. We held a brain cancer fundraiser at one of the wineries. We've paraglided and zip trekked.  We even took tap dancing lessons. Almost every year we now return to Carlsbad, CA to celebrate our wedding anniversary. (Fun factoid- Ted and I were married on a reality TV show back in the day when they were still new, 1996. And no it wasn't Bridezilla! We were married on a show called, "A Wedding Story," in The Carlsbad Flower Fields. We love Carlsbad, and if we had a bazillion dollars, we'd move back. )

Ted and I have spent our lives working in the "helping" professions, so volunteering is nothing new to us. Almost everywhere we've ever lived, we've done some type of volunteer work, but since D-Day, it has taken on a new meaning. We don't do it because we think there will be some kind of great reward in an afterlife; we do it because we are driven to ease others' pain. You would think that if your life is filled with shit that you would want to avoid it as much as possible, but there is something very life giving and rewarding when you help others. It can be a huge distraction to your own problems. I remember when Ted was first diagnosed; my friends didn't want to tell me their problems. They were ashamed because they thought their problems were petty in light of what we were going through, but I begged them to tell me. I needed an escape from my own trouble.