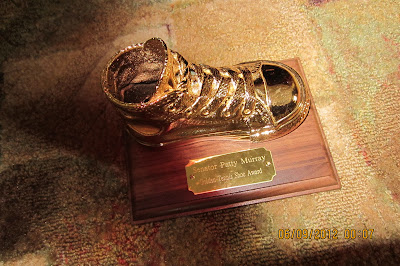 We were thrilled to attend The Golden Shoe Award Ceremony in Seattle yesterday. It was a very heartwarming and overwhelming event for both of us. Ted was one of three recipients out of hundreds who were nominated.


Jennifer Conley, another brain cancer survivor, nominated Ted after being inspired by his ability to keep moving forward and to give back to others as he struggles with this type of cancer. Jennifer found our website nearly four years ago and contacted us. We discovered that we live only a mile apart. Jeniffer is another long term survivor. She is currently at year five. One thing Ted and Jeniffer have in common, besides the fact that they had the same skillful brain surgeon, is that they both seem to keep smiling and moving forward in the face of life and death struggles. They are both truly inspirational people. Thank you Jennifer! Jennifer was able to join us for the ceremony along with her husband Chris.


Jennifer is a big fan of the guest speaker, Paul Begala, so during our VIP treatment we were allowed private photo sessions with Senator Murray and Mr. Begala. After seeing Begala speak, I am his newest fan and intend to watch him on CNN. He should have been a comedian!