So the good news is that Ted turned 60 today.  They told him he'd never make it to 54, but here he is, and with his birthday also comes more good news.  His MRI was good.  This is a day we never thought we'd see.  Well, I never thought it. He of course keeps saying he never doubted it. 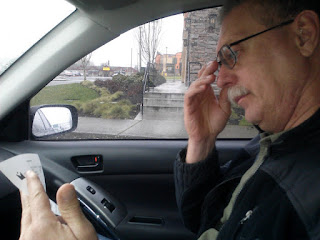 This photo is of Ted reading his results. We have been in the system so long that we can usually get results the same day if we bother driving to the imaging center to pick them up.  Of course it's not a bother.

I sometimes feel odd posting his results.  On one hand, I do it because I know it gives many people hope.  I hear from you all the time, but on the other hand, I don't want to come across as if we are gloating.  We aren't, so It's a strange place to be.

The first time we went to Ted's radiation treatment, I sat outside the treatment room in the safe little lobby, far away from the deadly rays that would become Ted's ally in this war.  It was a big airy room with lots of windows.  The tables had jigsaw puzzles and magazines, as if they could distract us from what we were there for.   From the back of the reception area, where patients were being seen, I heard a bell ring and a great round of applause.  I was told that this bell was rung for people who were cancer free.   I hated that bell that day.  I remember thinking that that bell would never ring for Ted because GBMs aren't that kind of cancer. There is no remission or freedom from this beast.  I wanted them to stop the practice of ringing bells.  It seemed so unfair to the rest of us who would never know that joy.  Sometimes when I post how we are doing, I feel like that obnoxious bell.  I tell all of you how are life keeps going on and how well we are doing, while many of you are still in the early stages and frightened for your life.

Just know that that isn't my intention. When Patrick, my stepson, was killed in the very beginning of this nightmare, I was slapped in the face with the reality that it could end for any one of us at any second.   He had no chance to fight or say goodbye, but Ted did.  I understand the bell now.  It has never rung for Ted and of course it won't, unless they find a cure, and who knows, maybe they will.  There have been some remarkable things going on in the treatment of cancer since he was first diagnosed.  I never give up hope.
Posted by Unknown at 10:21 PM