Sunday we decided to mix it up a bit and get a change of scenery. Shortly after Ted was diagnosed seven years ago, we needed cheap distractions, so we purchased a weekly newspaper (now we do everything on the Internet) and circled inexpensive local events that might provide us with entertainment and something to do other than think about CANCER.  Over the years, finding weird things to do for little or no cost has become second nature to us, but I have to admit we've been in the doldrums as of late. Mostly due to the fact that we've come into some very heavy expenses recently.  Those of you on the cancer budget understand this I'm sure. Between the loss of Ted's income all those years ago and endless streams of doctor's visits, including mine, we can't seem to get ahead.    To add to our double medical bills our "new" car, it's only 11 years old, blew an engine this week.  Woe is me!  I had to cancel my long awaited trip to Turkey.  With that being said, I was feeling sorry for myself and decided that I needed to stop the "Cry Me a River" song bouncing around my head and return to the mentality of seven years ago. Losing the car for almost a week inspired our latest entertainment idea.
Let's take mass transit!  Portland has a pretty good system, so I let Ted  plan the day, and we headed out with the intention to visit a Farmer's Market across town at Orenco Station near Hillsboro, Oregon. The market is open from 11-2 on Sundays.  So we hit the road with high hopes for a great adventure. As we pulled onto our street, my cellphone rang.  It was the mechanic telling us our car was repaired and ready for pickup.  By the time we drove to the mechanic, exactly 35 minutes in the wrong direction, we'd lost a good hour, but that wasn't going to stop us, so we changed cars and rebooted our trip and drove to the nearest Max station, happy to become tourists in our own town. We mindlessly snapped pictures as if we were new to town, occasionally checking our watches. Guess what?  It takes exactly one and a half hours to cross town on the Max line. We arrived at the Orenco Station Farmer's Market at exactly 2:00.  They were closed. Tents were being folded up, vegetables were being reboxed and a man with a large triangle bell was banging it while telling everyone to leave. Fortunately the portable toilets hadn't been hauled off yet because nature eventually calls, especially when mass transit doesn't have facilities.   Three hours later we returned home, probably setting the record for the longest trip to an outhouse in history.  But it was fun and we now know the red and blue lines of our local train system like experts.  Now that's entertainment. 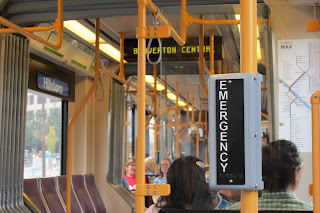