Except for the extreme heat, and Ted's iffy MRI results two months ago, we've done our best to enjoy the beautiful scenery in this part of the world this summer.  This photo was taken three weeks ago during a seven and a half mile hike at Lacamas Lake, Washington.

Last Sunday, our niece, Ella Masar, a professional soccer player for Houston Dash, came to Portland to play the Portland Thorns. The day was hot and the train ride home turned into a longer ordeal than planned, but it was great to see Ella play. 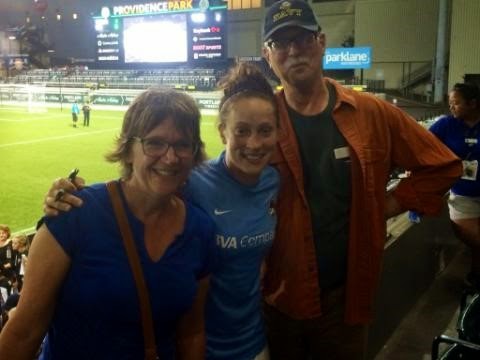 I don't plan to take the night train again.  There was an hour delay, probably due to heat on the tracks, that left us sitting in downtown Portland at 11:00 p.m.  A cement wall provided front row seats to Portland after hours.  Skateboarders, homeless people, cops and self proclaimed entertainers went about their nightly routines. A woman wearing a black cocktail dress, straddling a white mini bicycle serenaded everyone within a half mile radius with off key, homespun songs that included lyrics like, "You put your hand in my sweater hole."  Lucky for us, she boarded our train and sang her heart out, posing for selfies. Other than a guy with a beer can, she was her biggest fan. Twenty minutes into the trip, she exited the train, her drunken fan in tow. Too bad for him, she hopped the mini bike and pedaled off into the night.